Currently when you select a sales order or create a new one from the Sales Oder List, it opens up the details screen in a modal dialog by default.

Instead of using a modal popup dialog, you may want to open the details view on the side in a non-modal way. This will make it easier to view and edit details of multiple sales orders, since you can easily open the order details from the grid. But it also presents some challenges that we'll discuss later in this section.

In order to open Sales Order Details view from the Sales Order List view for new or existing sales orders, all you have to do is to update the new and details links defined on the SalesOrderList data object, and set the mode="inline" attribute, as shown below.

The default value for this mode attribute is popup, which opens the view in a popup dialog.

When using a master-details layout with a single child view, it makes sense to open the details panel by selecting a row in the results data grid, instead of having to click on a link on one of the columns, such as SO#, like we did for the popup dialog.

You can easily configure it in the ui:display element of that link by setting the on-selection="true" attribute instead of the on-field attribute, as follows.

The model doesn't prevent you from setting both on-field and on-selection attributes, but in practicality you may want to set either one or another.

Let's build the model and run the application to review the results. If you open the Sales Order List screen and run the search, you'll notice that there's no link on the SO# column now.

Instead, the results grid will have selection enabled, which will open up the Sales Order Details view to the right, as illustrated below. 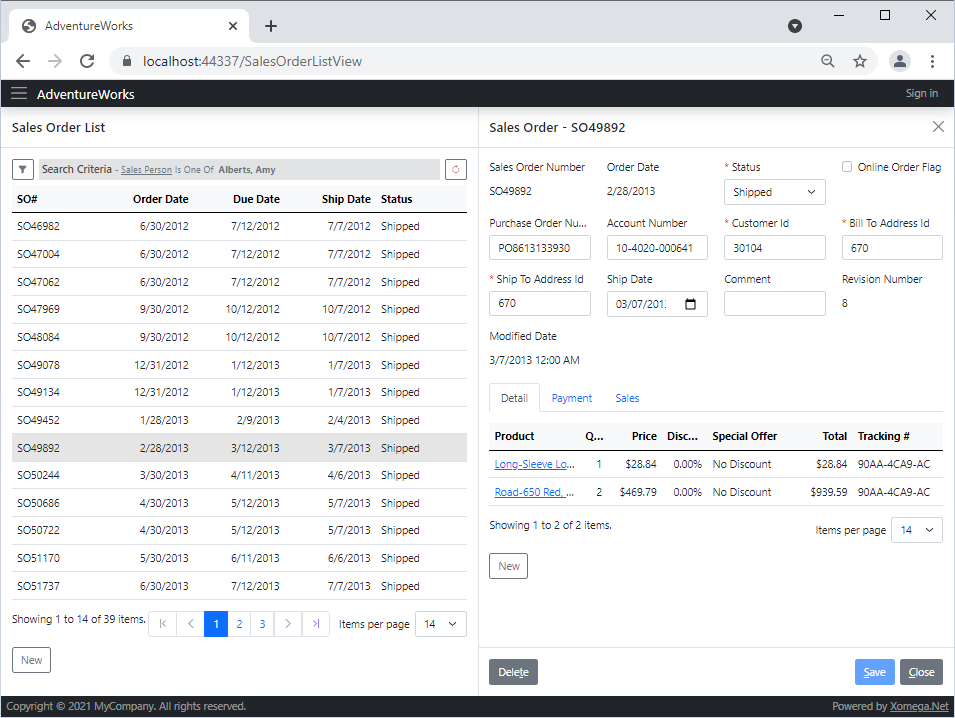 Let's review some of the notable changes that took place in our screen.

The idea is that you'd put the most important columns in the first half of the master grid, which would allow the user to easily identify the record in order to select it to view its details. And for any selected record, the details panel will presumably already include all of the original fields from the master grid in addition to the other details.

If you don't like the default behavior of showing only the first columns in the master grid, you can override this behavior in the customized list object.

Even with master-details layout the view will use responsive layout based on the width of the screen. So as the screen width goes down, the details panel will start wrapping into fewer columns until, at some point, half a screen would not be enough for it, and it will take up the entire screen, hiding the master list.

At this point the layout of the details fields may also go back to using more columns, since the view will take more screen real estate.

If you make any changes in the details view, and will try to close it without saving, you'll get a confirmation message about the unsaved changes, just like with the popup dialog.

However, with master-details layout, you will also get the confirmation message if you try to select another record from the master grid, or create a new record. Cancelling this message will also cancel the new row selection, and will keep the selection on the original row.